Given the central role that testing plays in the American educational system, most datasets that we have on racial and ethnic differences in cognitive ability include only children, adolescents, or young adults. Most of the economic and social effects of cognitive differences are, however, produced by the working age population, so it would be useful to have test scores from older adults as well. The PIAAC survey of adult skills conducted by the OECD provides excellent data for this purpose.

The PIAAC is an international survey that was conducted in a number of developed countries in 2011–2014. The participants, aged between 16–65, completed tests on numeracy, literacy, and problem solving skills. The US PIAAC sample is nationally representative and includes data from about 8,700 respondents.

In this post, I’ll analyze American PIAAC data using the International Data Explorer (courtesy of the National Center for Education Statistics). I’ll report racial/ethnic gaps in numeracy, literacy, problem solving, and general cognitive ability in ten-year intervals from age 16 to age 65. The race/ethnicity categories analyzed are white, black, and Hispanic; there’s not enough data on other groups. Data on Hispanics are unavailable for some cohorts. To avoid language confounds, only native-born Americans were included in the analysis.

The first table shows mean Numeracy scores for each group, standard errors of the means (SEM), standard deviations (SD), as well as d values, or standardized gaps between same-aged whites and non-whites. The d values were calculated by dividing the differences between white mean scores and black/Hispanic mean scores by pooled, unweighted standard deviations. 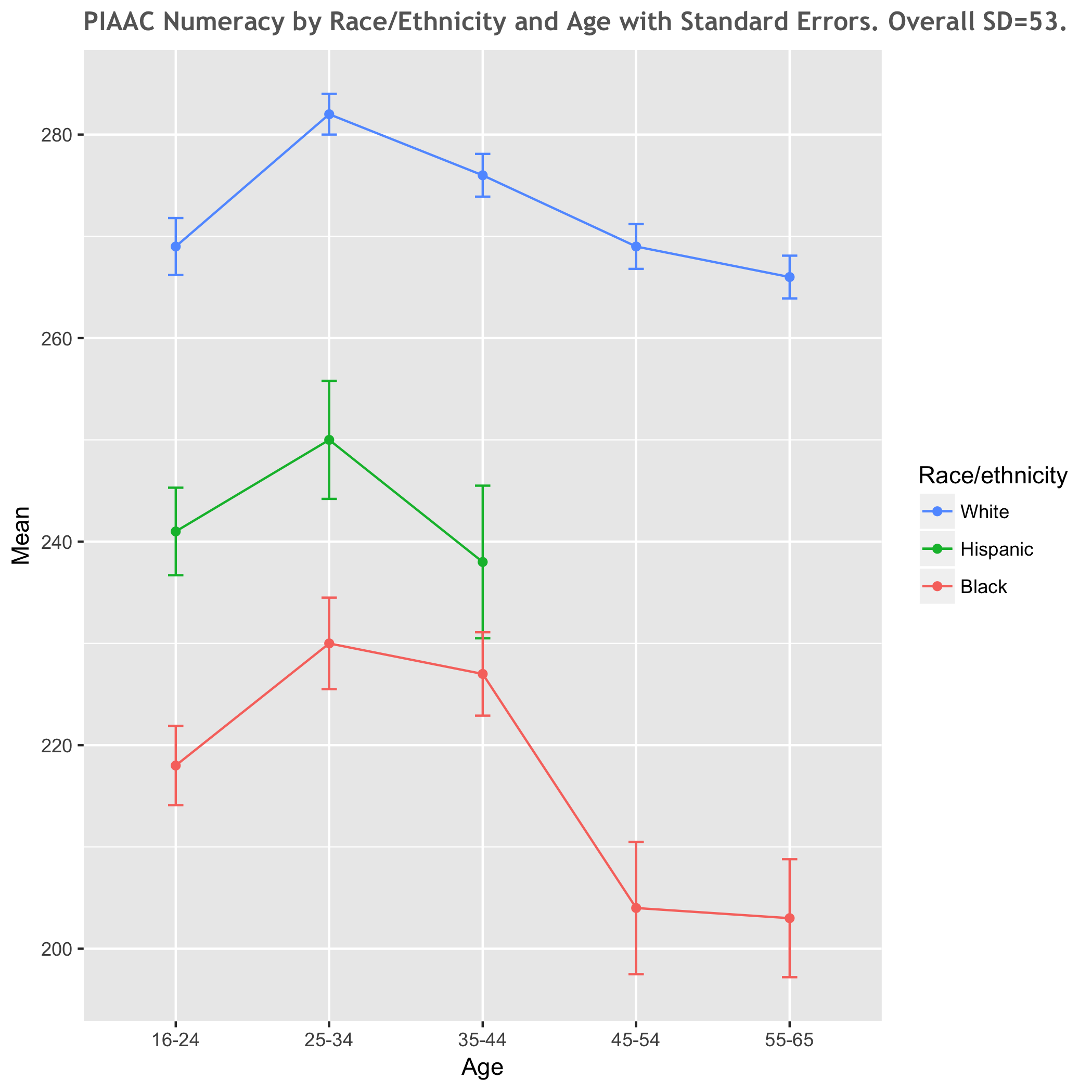 The next table shows mean Literacy scores for each group, with the same statistics reported as earlier.

Here are the gaps in graphical format: 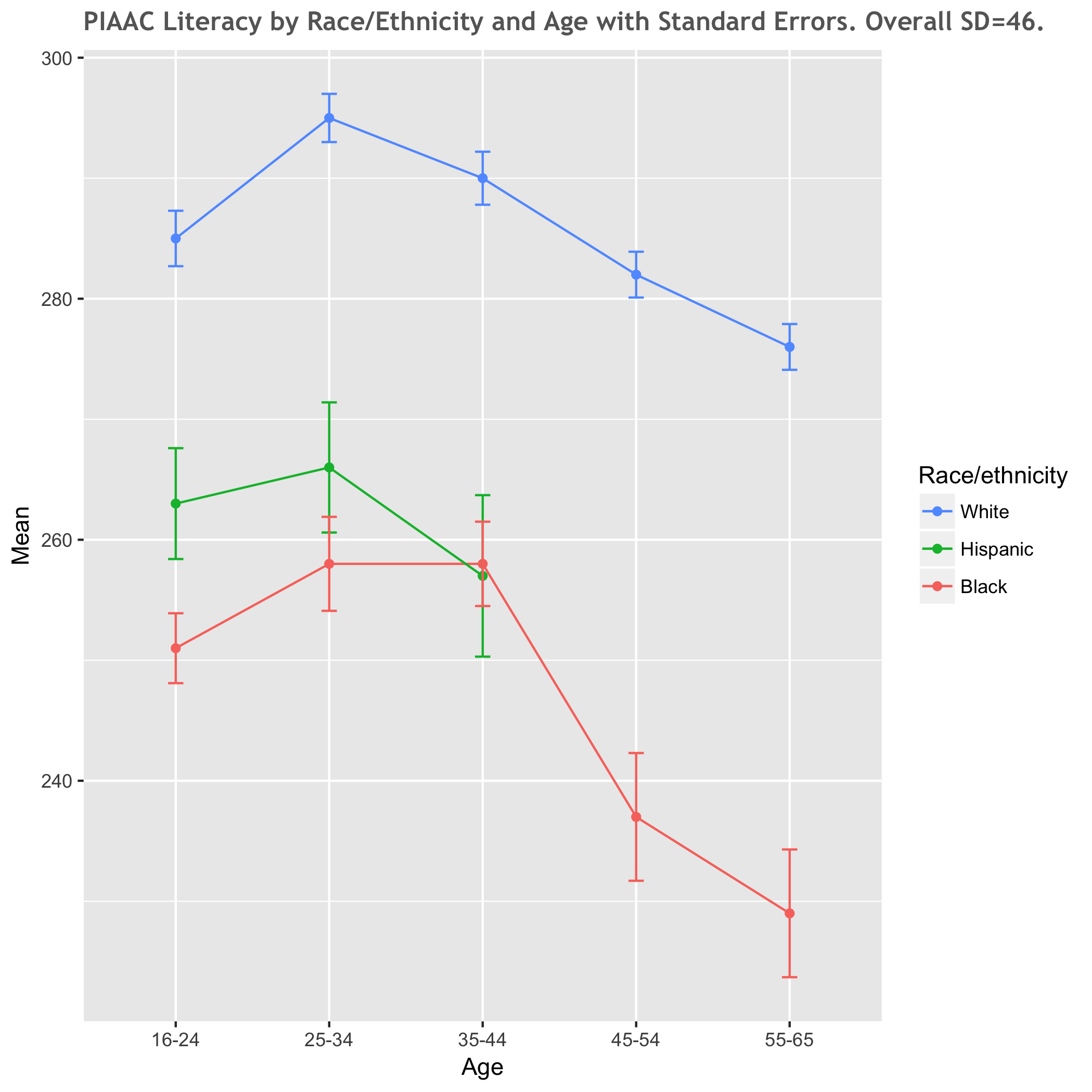 Let’s look at Problem Solving scores next. The table below has the familiar statistics. The full name of the test is “Problem Solving in Technology-Rich Environments”, and it has an emphasis on computer skills, which probably means that the test is biased in favor of younger cohorts. This appears to be the reason why the overall white-Hispanic gap is so small in this test; the Hispanics sampled were disproportionately young. 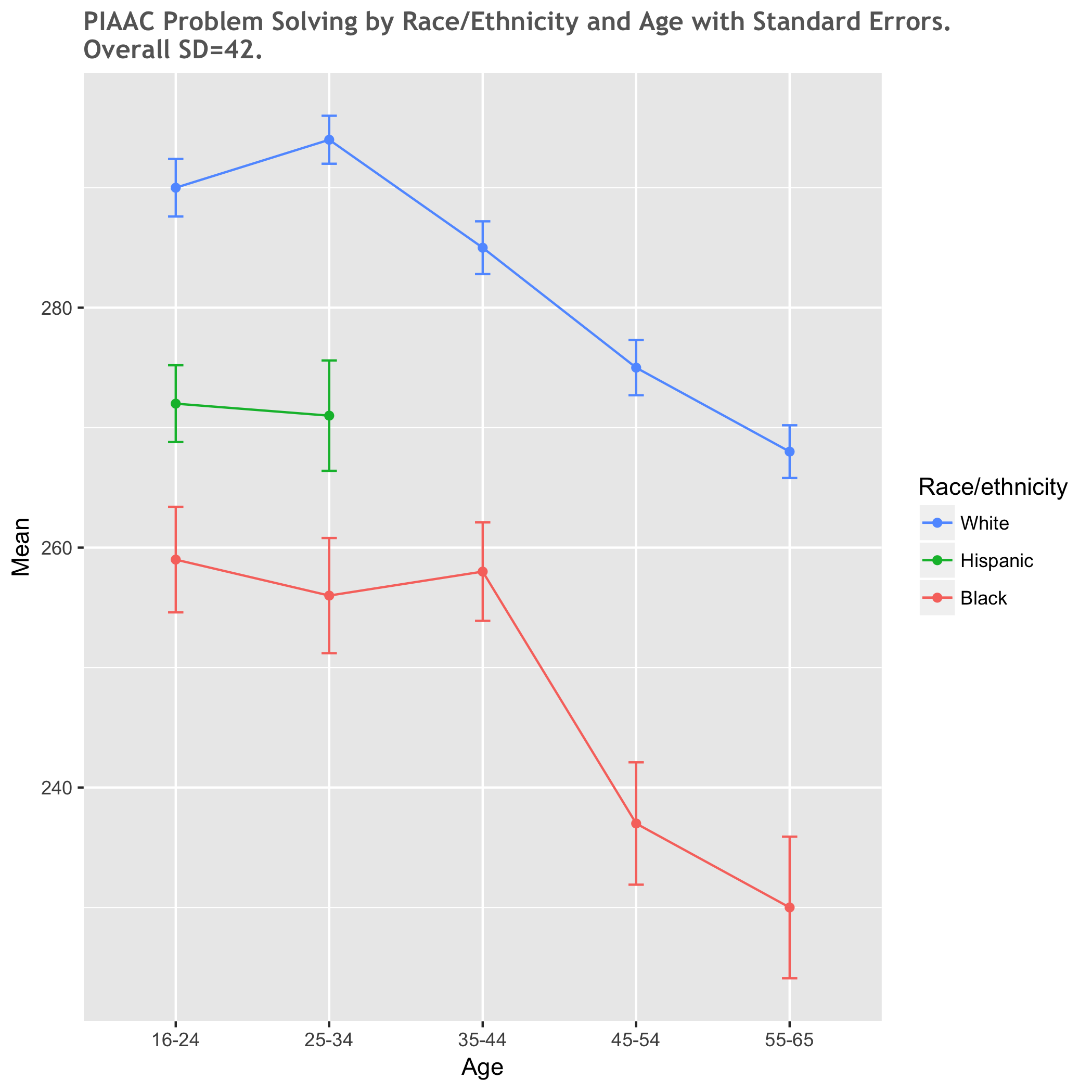 I will estimate racial/ethnic gaps in general cognitive ability, or g, for each age group by calculating composites of PIAAC numeracy, literacy, and problem solving scales. I’ll use the following formula from Sackett & Ellingson (1997) to combine the scores:

The formula requires information on correlations between PIAAC scales. Hanushek et al. (2015) report that the intercorrelations for the full international PIAAC sample are as follows:

While it would be optimal to have these correlations specifically for the US subsample and for different demographic groups, it would probably make little difference. Using the international values, the average correlation between PIAAC scales is (0.85+0.76+0.80)/3 ≈ 0.80. Plugging it and the d values presented in previous tables into the formula, we get estimates for g gaps. 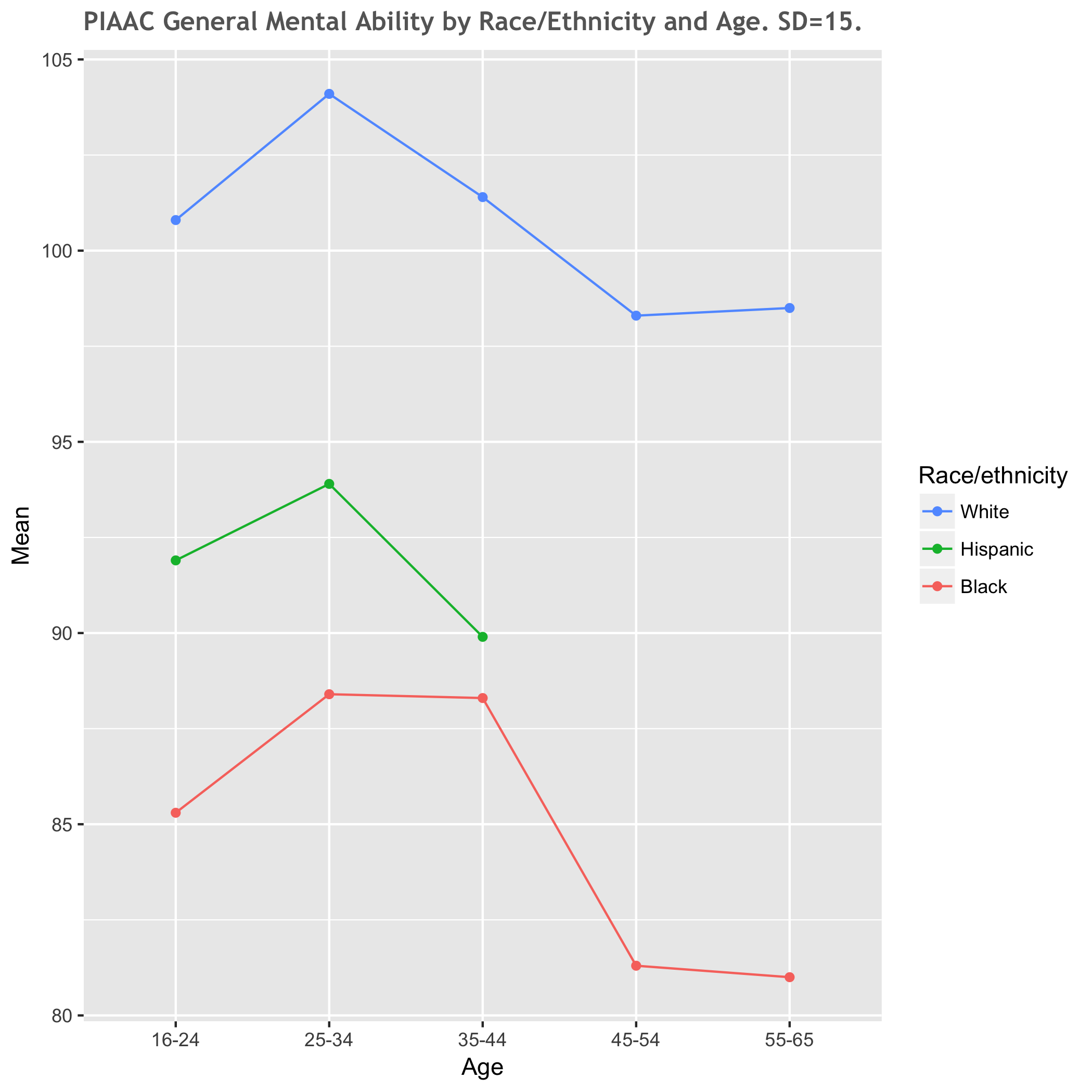 The overall black-white g gap across all ages is 0.98 standard deviations, or 14.7 IQ points, which closely matches the canonical black-white gap of 15 points. The white-Hispanic gap is only 0.55 standard deviations (8.3 IQ points), which is somewhat less than what most datasets suggest, probably reflecting the disproportionate youth of the Hispanic sample. Whether due to the Flynn effect or due to the specific nature of the tests, the PIAAC appears to be somewhat biased in favor of younger test-takers.

5. Validity of the PIAAC

There are rather large differences between racial and ethnic groups in cognitive ability across all age cohorts. But what is the significance of these gaps for understanding other racial disparities in American society? Some indication of it can be gleaned from Hanushek et al. (2015). They analyzed how the PIAAC cognitive test scores relate to labor market outcomes (data on which were also collected as part of the PIAAC survey). The following graph shows the returns, in terms of hourly wages, to differences in numeracy skills in various countries, controlling for gender and work experience. 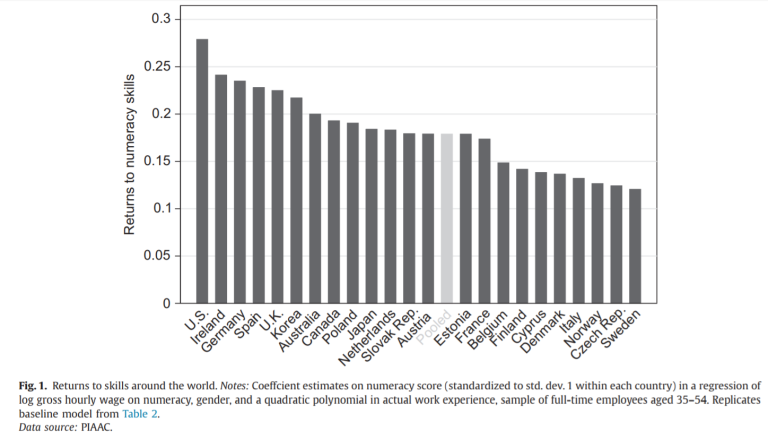 The US labor market is characterized by particularly large returns to cognitive skills. A standard deviation increase in numeracy is associated with an expected boost of e^0.28-1 ≈ 32% in hourly wages. Given that these days the average hourly wage of black Americans is between 70% and 82% of that of whites, it appears that the ability gap alone is almost sufficient to explain the wage gap; in women, it’s more than sufficient. The same is true of the white-Hispanic wage gap. (As I’ve shown previously, the returns to cognitive ability are similar across races.)