The Limits of Selectivity

Figure 1 below shows the last five years of SAT scores for African Americans who were a part of the Department of Defense educational system (DoDEA) and for those who were not (Nation). The former, the children of enlisted personal, perform almost 0.3 standardized units better than the latter. Elsewhere, I have documented that this 0.3 difference can be found in DoD schools both in the US and abroad. 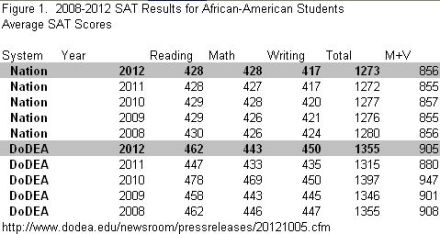 An obvious explanation for the DoDEA/ Nation difference is parental selectivity. Entrance into the military is mostly limited to those with AFQT z-scores above -1 relative to a US national mean of 0. As the Black cognitive ability mean is about -1, on the same scale, only the upper half of the Black population is qualified for entrance into the military; as a result, Africa American recruits represent, on average, the 75th percentile of the Black cognitive ability distribution. As such, those selected should be about 0.67 SD (standardized units) above the African-American mean. Given the coefficient of assortative mating typically reported in the literature of 0.33, and assuming a trivial number of Military-Military parings, a random pair of African Americans, for which one individual is or was a member of the military, should have a mid parent IQ 0.45 SD above that of a random pair for which neither individual is or was a member of the military. Multiplying by the typically found coefficient of regression of 0.6 gives one a military, non-military offspring difference of about 0.27 – and this would account for the DoDEA/Nation difference in full. In theory.

It’s always good to empirically confirm theoretical predictions. So, to evaluate our prediction above, I calculated the Black Military/Civilian ability ds in three nationally representative samples, the National Assessments of Adult Literacy (2003), The General Social Survey, and the National Longitudinal Study of Youth (1979). To note: across surveys, measure of ability varied widely as did population characteristics. The results are shown in figures 2 to 4. The average estimated mid-parent d was 0.3. The average estimated offspring d was 0.19, which wasn’t largely below our theoretical prediction. In two of the three samples, Whites who participated in the military also had higher scores than those who did not. On average, Whites were positively selected 0.12 SD (in theory they should be selected about 0.18 SD) while Blacks were positively selected 0.46 SD. Based on the relative selectivities of the parents and regression, one would predicted a B/W DoDEA gap that is 0.14 SD less than the B/W national gap, all other factors being equal. 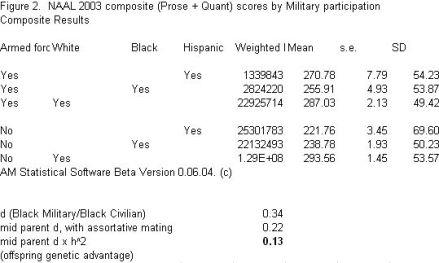 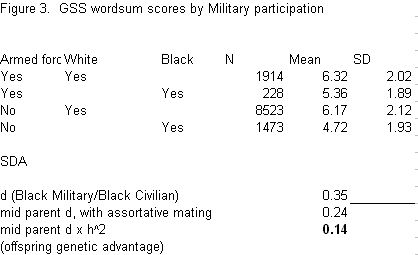 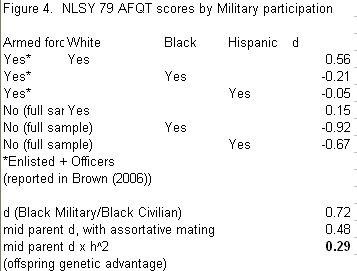 The DoD neglected to report White SAT scores, let alone group standard deviations, so to determine the magnitude of the respective B/W gaps, we have to rely on other less desirable sources. The National Assessment of Educational Progress (NAEP) is one such. Figure 10 shows the 2009 and 2011 NAEP science, reading, and math scores for Whites, Blacks, and Hispanics in the DoDEA and nationally. The cross year, cross subject average standardized B/W difference was 0.99 nationally and 0.80 in the DoDEA, giving a DoDEA/Nation B/W d of 0.19. If we treat these standardized achievement tests as IQ tests, then we can infer that three quarters of the difference can be accounted for by differences in parental selectivity.

The DoDEA score gap, adjusted for parental selectivity, in turn, give us an estimate of the extent to which the B/W national achievement gap can possibly be accounted for by schooling inequalities, as the quality of the DoD schools, both in the US and abroad are both high and fairly uniform. Comparing DoDEA with national studies represents a quasi-experimental design. We have: Gap (possibly due to schooling disparity) = National gap –( DoDEA gap + differential selectivity); or: no more than 0.05 SD. Since the military is frequently held up as a model of “integration” and equal opportunity, and since reduced racial gaps are pointed to in support of this, we can also take our 0.05 as being the upper limit of the possible extent to which segregation and unequal opportunity could account for the B/W gap.

Moving on, another, though less frequently cited, difference in cognitive ability is that between 2nd and 3rd+ generation African-Americans. Figure 8 presents the differences found in the 2003 National Assessments of Adult Literacy, figure 9 presents the differences found in the High School Longitudinal Study of 2009 (1), and figure 11 presents a stylized summary of 2nd general Black and 3rd+ generation White gaps found in a number of samples. To note: For this summary, the d values were estimated often by eyeballing the score differences, hence these are rough estimates. The scores and standard deviations have been reported elsewhere. 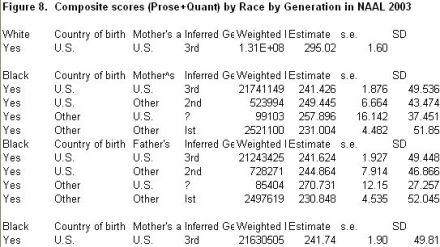 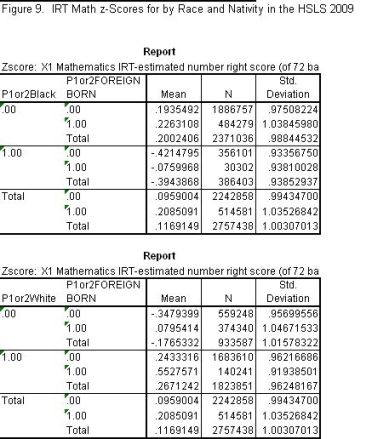 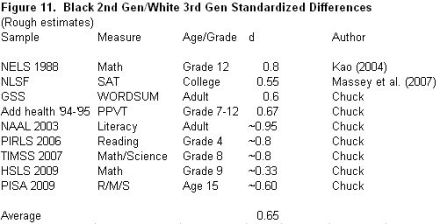 Now, one explanation which has been offered for the indubitable superior performance of 2nd Generation Blacks relative to 3rd generation Blacks is migrant selection. Unfortunately, this is a rather difficult hypothesis to evaluate. We can, nonetheless, examine the soundness of some of the models proposed. I have suggested:

1. Migration is a cognitively complex activity. As such, ceteris paribus, more intelligent individuals will have an easier time successfully migrating. As such, again ceteris paribus, successful migrants will be cognitively selected for relative to the pool of all would-be-migrants from the same region. The magnitude of migrant selectivity will depend on the selection ratio of the act of migrating (e.g., 10% of would be migrants fail on the account of IQ alone, when the mean IQ of the would-be-migrant pool is 100 UK norms) and on the mean IQ of the would-be-migrant pool.

2.The mean IQ of would-be-migrant pools – which is, essentially, an applicant pools — relative to that of the region will vary largely depending on mundane economic considerations. Generally, one can tell if a would-be-migrant pool is selected for relative to the region as a whole by comparing indexes of human capital of emigrants to non-emigrants (e.g., comparing emigrant/non-emigrant differences in educational attainment e.g., as presented in Docquier, F., & Marfouk, A. (2005)).

Now, the first part of this model makes a very basic prediction: all things being equal, migrants will be more cognitively selected than non migrants. To determine whether this is the case, I looked at mean differences between “movers” and “stayers” in the US in three nationally representative samples. Limiting ourselves to a within nation analysis eliminates the problem of cultural bias in mental ability testing. Of course, doing so also introduces other problems. For example, much internal, state-to-state, migration in the US results from young adults heading off to college. To control for a college effect, I decomposed scores for two of the samples by college attendance. Figure 5 gives the results for NLSY79. Figure 6 gives the results for NAALS 2003 and figure 7 gives the results for GSS. Across samples, the average advantage of movers over stayers was 0.2 SD. A stayer/mover difference of 0.2 SD is close to what one would get if the selection ratio of migrating was 90%. 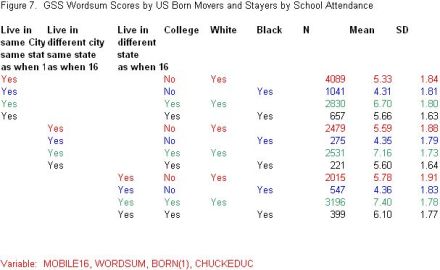 To formally confirm the implied conclusion that more intelligent individuals are more likely to successfully migrate, I ran a logistic regression with the GSS. (Filter: US born; dependent: dichotomously coded stayer (MOBILE16 1-2)/mover (MOBILE16 3); independent: zwordsum.) zWORDSUM was a significant, albeit weak, predictor of migration. B=0.355; EXP(B)=1.412. The odds of migrating increase 1.412 x per WORDSUM SD. Controlling for education (variable: CHUCKEDUC) didn’t change the significance of the effect. Using untransformed WORDSUM scores also didn’t change the significance of the effect. B=0.160; EXP(B)=1.174.

Despite being frequently used, GSS WORDSUM isn’t the best measure of cognitive ability. As an alternative, I created a composite score based on GSS WORDSUM (a vocabulary test) and ALIKE (a similarity test). The similarity test was given only in 1994, so this created composite has only limited utility. Below shows the R-matrix for WORDSUM, COMPOSITE, ALIKESUM, EDUC, and INCOME. As it can be seen the composite, theoretically a better measure of g, has slightly better predictive validity than either WORDSUM or ALIKE alone, as one would expect.

In 1996, GSS included the question (RES161), “Where did you spend most of your childhood until age 16?” Individuals were asked if they lived in the same community, a different community but same state, a different state, or outside the US. The results were as follows:

The overall results above, then, are consistent with the hypothesis that, all things being equal, migration is an, albeit weak, intelligence test. As such, we might expect successful international migrants, ceteris paribus, (as with successful intranational migrants) to be cognitively selected for relative to the would-be-migrating pools and, moreover, to be selected for in inverse proportion to the IQ of the nations from which they hail (assuming, of course, some commensurance between national IQ differences and true latent ability differences.) In the same way that African American military recruits are more selected for than are European American recruits, relative to the respective racial groups, immigrants from lower latent IQ countries should be more selected for relative to immigrants from higher latent IQ countries.

Getting back to the performance of 2nd Generation Blacks, how much of the 2nd Gen/3rd Gen Blacks difference could migrant selection possibly account for? If (a) international migration is no less cognitively challenging than intranational migration, if (b) the latent national IQs of the regions from which the Black international immigrants hail are no less than those of Western nations, and if (c) the would-be-migrant pools in these regions are not relatively under-represented in human capital, then no less than 0.2×0.6 = 0.12 SD (if both parents are immigrants) – or 2(0.2+.2*.33)x0.6 = 0.08 SD (if only one parent is an immigrant). This, of course, would be in comparison to our 0.25 or so 2nd Gen/3rd Gen African-America standardized difference. Now, international migration is probably more cognitively challenging than intranational migration. And the latent national IQs of African and Caribbean nations are probably lower than those of Western nations (for whatever reason, of course). As such, the selection on account of IQ alone is probably higher. Moreover, Black international migration pools from both Africa and the Caribbean are, in fact, highly selected relative to the regional populations (e.g., table 3 in Docquie and Marfouk (2005)). So in addition to selection on the account of migrating per se, Black migrant pools are selected in human capital — and probably latent ability to some extent — for mundane economic reasons. Given this, it wouldn’t be a stretch to argue that most of the 2nd/3rd generation difference can be accounted for by immigration selection.