The meaning of a Jensen Effect on the Color Effect

Dalliard showed that IQ correlates with color in both the American Black and Hispanic populations (a color effect) and, importantly, that the IQ-color correlations are positively related to a subtest’s general intelligence loading (a Jensen effect). In short, he showed that there was a Jensen effect on the IQ color effect. This is significant for reasons elaborated elsewhere. Generally, if an IQ difference is strongly positively correlated with g – is g(+) – biological causation is implicated; alternatively, if an IQ difference is strongly negatively correlated with g – is g(-) – cultural causation is implicated. Here, “biological causation” refers to psychophysiological influences on mental states that do not act through sensory informational pathways, while “cultural causation” refers to psychophysiological influences on mental states that act through these pathways; as an example of the general biological versus cultural causal schema, with respect to personality, differences induced by pharmacological agents would be classed as “biological causal” while differences induced by psychotherapy would be classed as “cultural causal.” This schema, of course, isn’t perfect – but it has utility and is not infrequently employed in psychology.

Now as for g-type and causal class, this is an inductive point backed up by theory. The reasoning is as follows: The correlation between g-loading and a subgroup IQ difference potentially ranges from, as with any correlation coefficient, -1 to +1. It so happens that known biologically caused differences cluster in the (+) region and that known culturally caused differences cluster in the (-) region. As such, when one encounters strongly g(+) or strongly g(-) differences one is justified in making a Bayesian inference concerning probable causal class (cultural or biological). To give some examples of g(+) and g(-) differences:

In theory, the clustering results because causal biological effects (e.g., nutrition and genetics) tend to act on general brain functioning and so foremost affect general ability and so tend to induce g-driven difference which produce g(+) effects, while casual cultural effects (e.g., test-training and better schooling) tend to act on localized mental functioning and so foremost affect specific abilities and so tend to induce specific factor-driven differences which produce g(-) effects. Obviously, from the above, one can’t deduce that moderately to strongly g(+) or g(-) differences are, respectively, causal biological or causal cultural. But one can, nonetheless, infer this. And the strength of the inference is dependent on the strength of the association between g-type and causal class. For example, the correlation coefficient (r) for the 14 examples above, dichotomously coded as biological =1, cultural =0 and g(+) =1 and g(-) =0), is r >0.8. Inference is indeed possible!

The situation, though, is more complex than presented above because some IQ score differences don’t represent latent ability differences; they are simply due to psychometric bias. The cause of this bias could be either, following our schema, biological or cultural. For example, IQ score differences induced by sleeping meds would be classed as causal biological and IQ score differences induced by low motivation would be classed as causal cultural. As the causes, though, are not influencing latent ability – just the measure of it – they would not be predicted to induce concordant g(+) or g(-) effects. The effects of low motivation and sleeping meds would be (predicted to be) orthogonal to g-loadings (g(0)), because these effects are not on latent ability and so do not act on specific abilities or general ability, per se. It’s tempting to infer that g(0) effects, then, implicate non-cognitive causes – causes that act by way of psychometric bias – but this is problematic since one can also get g(0) effects when one has both large general intelligence difference and large specific factor differences. There is, then, an ambiguous class of g effects, g(0) effects.

The IQ color effect, though, is clearly a Jensen effect, so the above consideration need not distract us. Biological causation is implicated. And the most likely source given the groups under question and some ancillary facts is genes. Dalliard has noted that nurturists will, nonetheless, insist that the IQ differences are somehow due to “colorism” or “discrimination based on skin color.” This is a queer proposition, as framed, as it is now increasingly accepted that the outcomes difference between racial and ethnic groups are the product of “human capital” differences and not, at least contemporaneous, discrimination. Lighter toned Blacks and Hispanics are, of course, inadvertently discriminated for relative to darker tone individuals of the same populations. Such discrimination is inevitable given the institutional discrimination for Blacks and Hispanics (e.g., affirmative action, reducing disparate impact), given that this institutional discrimination is conditioned on aptitude (which it is), and given that aptitude correlates with color within both populations (which it does). But this isn’t what colorists fancy is happening. They imagine, rather, that darker toned Blacks and Hispanics are being discriminated against on account of their color. Given that Hardy-Weinberg equilibrium has been reached for neither population, this color discrimination presumably explains, in turn, the significant association between African ancestry and general intelligence related social outcomes in both populations. For example, as found by Cheng et al. (2012): 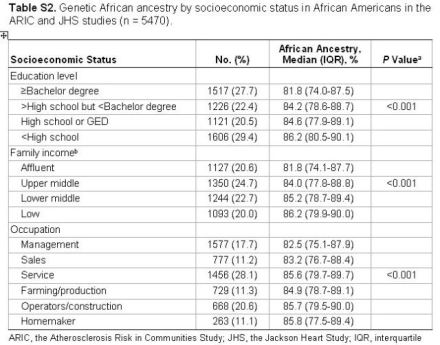 As Dalliard has mentioned, one can directly test the hypothesis of colorism by looking at the color-outcome associations within and between families. What analyses have been done to date do not seem to support this model. But more on that later! Meng Hu and I decided to explore the colorism hypothesis, for African Americans, by an alternative route. As background, we knew that for Blacks, IQ and outcomes correlated with genealogical ancestry in addition to both phenotype (color) and genes. To show this, I, for example, correlated inferred ancestry and math IRT scores for Blacks in the High School Longitudinal Study of 2009: 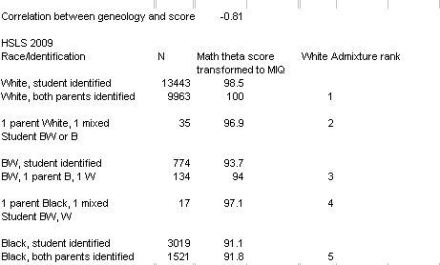 (In this sample, parents had the option of choosing “Mixed Race.” I made the reasonable assumption that if one parent identified as “White” and one parent identified as “Mixed” and the student identified as “Black” or “Black and White”, then the parent who identified as “Mixed” was, at least in part, Black. Mutatis mutandis for “Black”,”Mixed”, and “White or White and Black.” This assumption allowed me to identify individuals who were part Black or part White on only one side, which then allowed me to create 5 “genealogical categories” based on parental race: “White/White”,”White/Black-Mixed”, “White/Black”, “Black/White-Mixed”, and “Black/Black”. I ranked these categories in terms of implied White admixture and then correlated them with the mean scores. The results: r =0.81.)

Meng Hu and I reasoned that if color discrimination was driving the effects, then color should statistically explain most of the associations. We attempted to find proxies for genomic ancestry (rates of various diseases, etc.) in the few studies which also had color and IQ data but came up empty handed. In both the Add Health and NLSY97, though, there was information on IQ, color, and reported ancestry. Using (parental or self) reported ancestry as an index of genealogical ancestry, we were able to validate skin color as an index of European admixture in both of these surveys and to determine the extent to which color could explain the IQ-ancestry association. The finding was that, at least for African Americans, European ancestry was independently associated with IQ. I will review the Add health results for African Americans below.

We explored different methods of identifying African Americans. We decided to define a person as “Black” if in wave I and wave III they self-identified as non Hispanics Black and if in at least one of those waves they were interviewer identified as being Black. The latter stipulation was to preclude the possibility of pseudo Blacks, particularly Whites identifying as Black. Originally we had stipulated that a Black person was a Black person if and only if in both waves they identified and were identified as being Black. But we found that this was an overly exclusive definition. There were a number of semi-darkly pigmented individuals who consistently self identified as being Black but were inconsistently interviewer identified as Black, presumably because of ambiguous phenotype. An example of this situation is shown in table 1 in the excel file (not shown below). After deciding on a definition of Black, we defined White in a corresponding fashion. 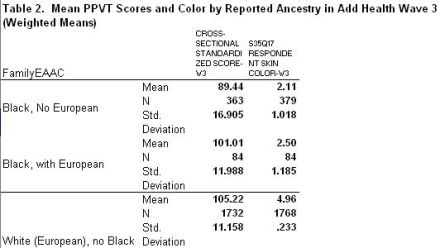 We then dichotomously coded ancestry as Black only/someWhite (FamilyEAAC) and correlated this with color and IQ in the African American population. Table 3 shows the correlations. All were significant.

Following this we ran a hierarchical regression. FamilyEAAC was entered into the equation in the first step and skin color, the presumed proposed mediating factor according to the colorist model, was entered into the second step. As shown in table 4, reported European Ancestry was a significant positive predictor of IQ, indicating that Blacks who reported European ancestry had higher IQs than Blacks who reported only African ancestry. When skin color was entered into the model the statistical significance of FamilyEAAC did not change predictor, indicating that skin color did not practically significantly mediate the European ancestry-IQ association. Very similar results were found for the NLSY 97 in which parental reported ancestry was used as the index of genealogical ancestry.

The results here weren’t surprising to us. They indicated that color discrimination can not possibly explain the association between IQ and reported European ancestry. They were also relatively consistent with our genetic perspective: The association between color and IQ was weaker than that between reported European ancestry and IQ. The weak association between color and IQ is a product of color being modestly associated with ancestry and of range restriction of White ancestry in the Black population. The typically found standard deviation of White ancestry for Blacks who have two Black parents is about 15%. The best r between IQ and color reported for US African Americans is 0.44. An increase in one standard deviations of color then will be associated with an increase in about 0.44 standard deviations in ancestry or about 6.5% of White admixture. Not much. The association is stronger between reported ancestry and IQ because reported ancestry references recent admixture. People remember only 3-4 generations back – often less. To put this in perspective, a Black person who had two Black parents but was white in color (5 on a 1 to 5 scale) – that is, was 3 standard deviations more light than usual, would tend to have around 40% White admixture, which is the same amount as that of a Black person with one White (and three Black) grandparents. That is, reported ancestry tends to be more associated with admixture than is color. It is not surprising to us then that it is also more associated with IQ in the Black and Hispanic populations than is color.

That said, there are a number of possible models that could account for the associations in question. Our aim here was simply to illustrate some limitations of the colorist one.