Self-reported white ancestry among US blacks : A Jensen effect

Because the hereditarian hypothesis states that the IQ advantage of white ancestry has a genetic component, it would certainly predict (contrary to the cultural hypothesis) that the magnitude of white ancestry advantage is a function of the g-loadedness of cognitive tests. If the advantage of white ancestry is larger in the genetic component of cognitive tests, this surely is not a pattern that cultural hypotheses could have predicted. One way to see obtain those estimates is to simply perform a point-biserial correlation, that is, correlating a dichotomized variable (e.g., ancestry) with an interval variable (e.g., ASVAB subtests). The larger is the (positive) correlation and the larger is the advantage.

This is what I am testing here, using again Jensen’s MCV, with the data on g-loadings, BW gaps and sibling correlations among subtests, I gathered previously. The Excel file contains those data (as for my SPSS file, just contact me). The SPSS syntax for computing the white ancestry variable, as well as its correlation with ASVAB subtests, is given here. 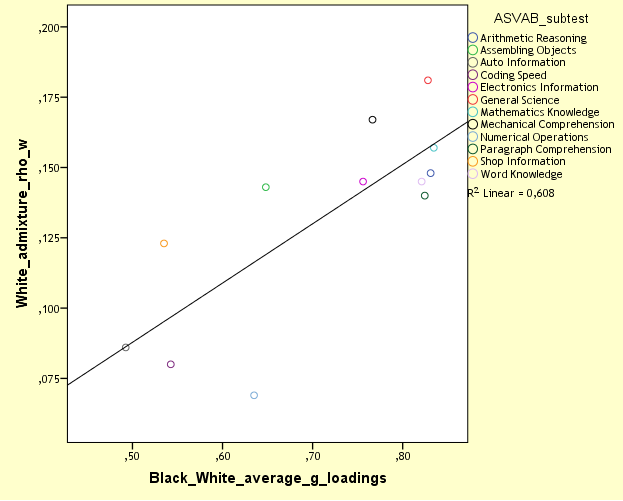 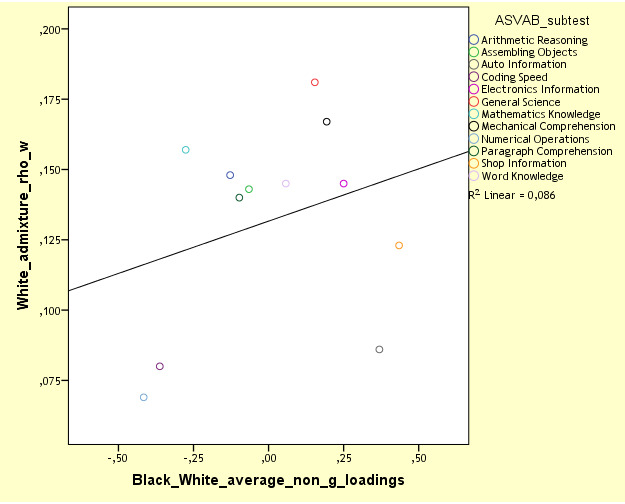 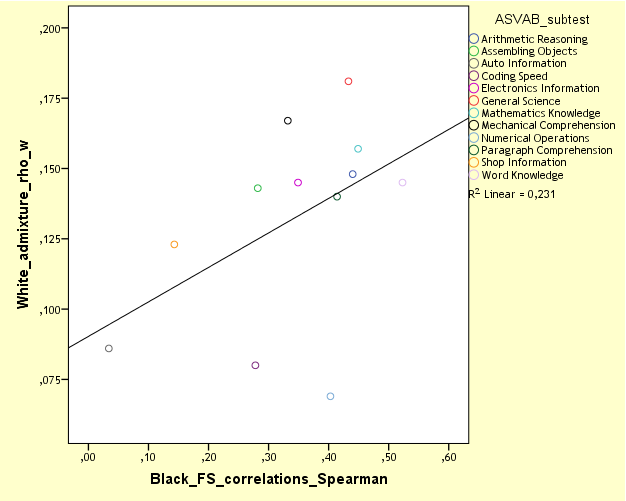 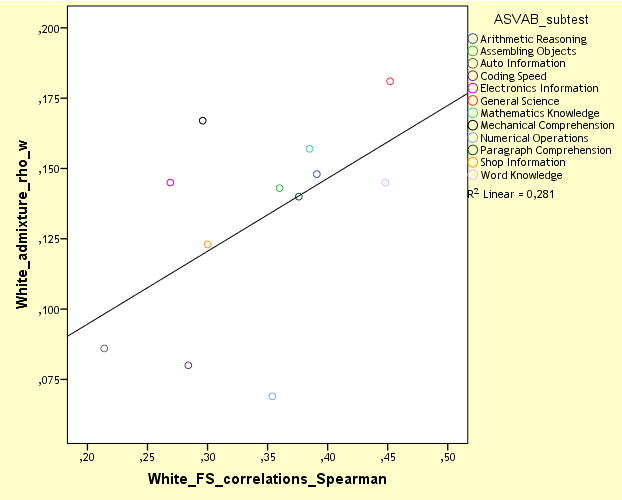 Still another way to test a Jensen effect is to simply compare the g-factor scores and non-g factor scores (extracted from the full sample) of blacks with and without parents having caucasian origins. The picture looks like this. 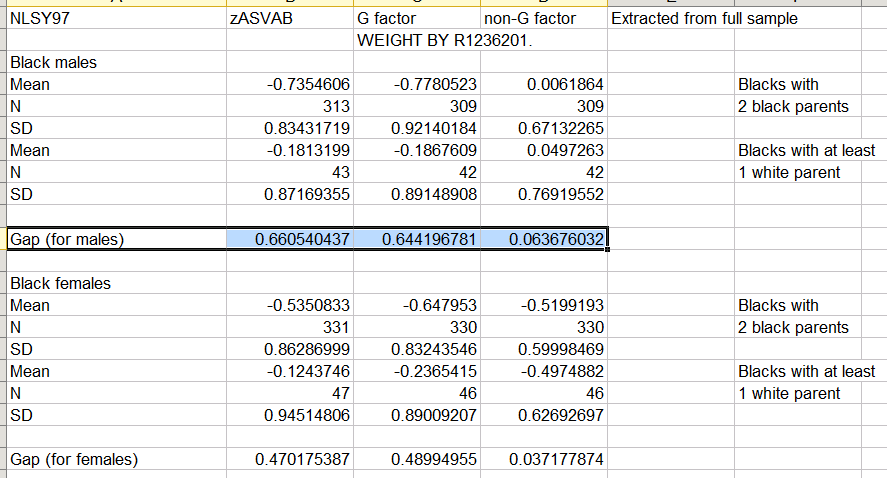 Clearly, the g-factor contributes to the differences, but not the non-g dimension. The conclusion is that white ancestry advantage among blacks is a Jensen effect, as well as skin color among blacks (Dalliard, Jan.29.2013).

Another interesting finding, now, is that the magnitude of the advantage of (lighter) skin color among subtests also correlates with black-white d gap, g-loadings, and black/white sibling correlations, as shown below : 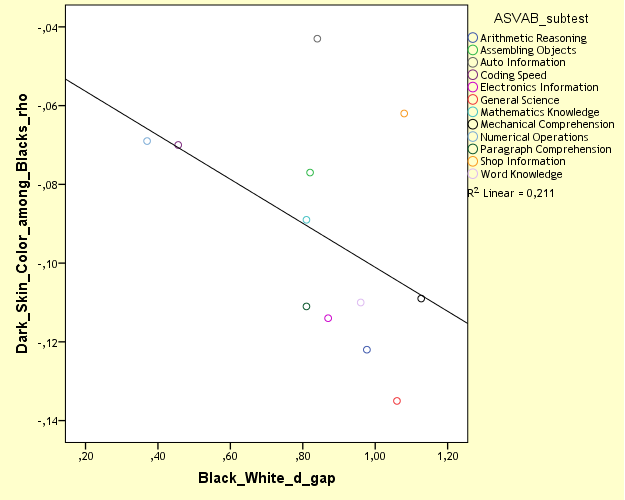 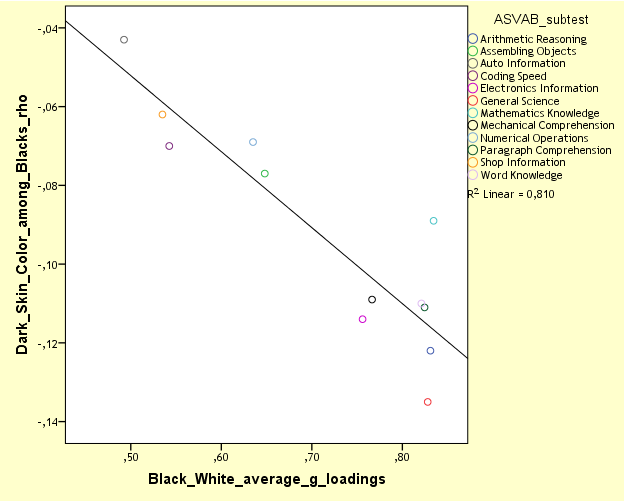 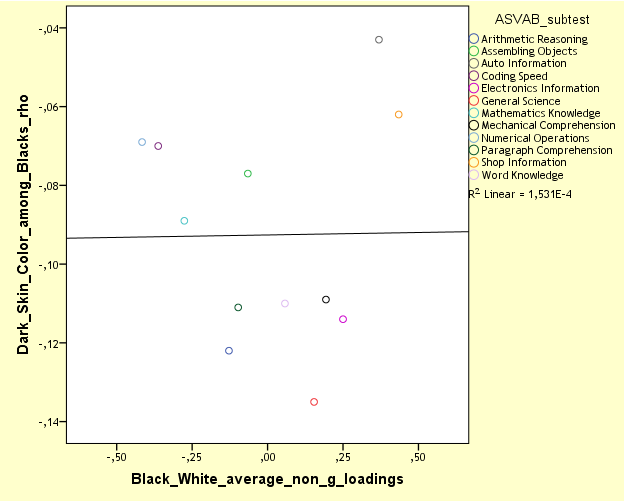 Surely, this is not in line with the colorism hypothesis. Furthermore, unlike the self-reported ancestry variable, the pattern of correlations for skin color doesn’t change across sex group. These correlations were equally strong, after separating the black sample into males and females. What is causing the difference then ? Maybe skin color and ancestry are not correlated among black women. It does not appear to be the case. White ancestry and skin color correlate at -0.216 (r) and -0.207 (rho) among black men and at -0.168 (r) and -0.151 (rho) among black women. Plus, the white ancestry advantage and light skin color advantage among subtests are strongly correlated for black men (around +0.80) while they were weakly correlated for black women (around +0.05 and +0.30). So, I don’t have a clear idea. Nevertheless, keep in mind that the congruence coefficients show a very high similarity in factor structure between blacks with and without white ancestry, regarding the g factor.

It can be argued that the correlation between the dichotomized (self-reported) white ancestry variable and skin color is relatively low, compared to what Parra (2004, table 1) has found (0.44%). I haven’t noticed that before, but (apart from its apparently low reliability) the departure from an optimal 50/50 split of any dichotomized variable (that is, with only two categories) would lower the obtained correlations, as Jensen (1998, p. 478) pointed out. Here’s what the histogram shows.

So the fact that ancestry was correlating more strongly with ASVAB (subtests) than does skin color, among blacks, is quite impressive when such effect has been biased downward.

As a short conclusion. Earlier, Nisbett (1995, pp. 5-6) says that one way to narrow the race-IQ debate is to establish the relationship between racial admixture and IQ. The three types of estimates are : skin color, blood groups, self-reported ancestry. The first one is defective, Nisbett argued, because it is a poor reliable estimate, although the empirically found correlation of 0.15-0.20 is not lower than what a hereditarian hypothesis would have predicted (Jensen, 1973, pp. 222-223). As for the second one, he considers the studies by Scarr (1977) and Loehlin (1973) as having successfully rejected the hereditarian hypothesis. As Jensen (1998, pp. 478-481, 525-526) noted however, this is not the case, insofar as the methodology is unsound and the indicators clearly unreliable due to the phenomenon of allele disassociation over the generations among the racially hybridized population. For the latter one, Nisbett cites the Witty & Jenkins 1934 study. But as Chuck (abc102, July.13.2008, Occidentalist, July.13.2011) and Mackenzie (1984, p. 1226) noted, this study is not without methodological problems. In any case, we have already seen that the Add Health and the NLSY97 do not replicate the Witty/Jenkins study and even found, as for the latter, a Jensen effect.