It’s been almost 50 years now that the famous study of Willerman et al. (1974) has been published. This study is regularly cited as one of the most convincing evidence against the hereditarian hypothesis, despite strong emphasis by hereditarians on the failure of experimental efforts to raise IQ (more specifically, g) and population differences magnifying during adolescence or adulthood due to increasing heritability with age (Jensen, 1998, pp. 333-344, 359, 474; See Malloy [2013] for a case of a stability model with respect to the Black-White gap). Caution about this study is now vindicated. The data used by Willerman also revealed a pattern: the IQ deficits related to having a Black mother seem to vanish over time (Hu, 2022).

When Willerman et al. (1974) analyzed the Collaborative Perinatal Project data, they reported two findings. First, that interracial infants tested at 8 month of age did not show any deficits related to having a Black mother (versus White mother). Second, that interracial children of Black mother tested at age 4 did show a large IQ deficit. The “race of mother” hypothesis was then proposed as an explanation for this outcome, as mother is the primary agent of socialization in the family. Accordingly, adequate parenting would produce huge effect.

Extensive research has been conducted on the effect of education and parenting on cognitive ability. Often, when meaningful gains were found at young ages, they usually fade out several years later (Besharov et al. 2011; te Nijenhuis et al., 2014, 2015). Education programs such as Head Start, Abecedarian, etc., failed at raising IQ permanently despite training the mothers and providing extensive socialization services. But the argument already falls flat to begin with if parenting doesn’t have a lasting effect on cognitive ability (Beaver et al., 2014). Jensen’s argument about the limits of environmental variations is summarized in Dalliard’s modern restatement of Jensen’s model.

While it is correct to say that including socioeconomic status (SES) as covariate will partial out some of the genetically-induced parental characteristics and therefore lacks theoretical sense, directly testing their hypothesis requires the inclusion of SES as a covariate in a regression.

Therefore, in my recent paper, published at OpenPsych, I re-analyzed the CPP data since IQ scores at age 7 were available and Willerman only reported IQ scores at age 4. After controlling for SES, the IQ gap at age 4 was as high as 7 points but dropped at 4 points at age 7. Without controlling for SES, the IQ gap is similar at both ages. Whether the gap would be further reduced later is unknown but it wouldn’t be surprising. In the paper, I mentioned that the gap reduction is mostly driven by married women, since children of unmarried women didn’t reduce the gap. However, as I noted here, this is due to sampling error.

However, to fully test the “race of mother” hypothesis, one needs to consider other ethnic groups as well. After analyzing the children of Hispanic-White matings and the children of Asian-White matings, I couldn’t confirm the hypothesis again. Even the opposite was true from the Hispanic group. If Hispanic mother is suspected to be associated with lower children IQ, the CPP showed that children with Hispanic mothers (as opposed to White mothers) had much higher IQ, before and after controlling for SES.

After analyzing the CPP, I turned to the Add Health and the HSLS. While the Add Health collected verbal IQ (AHPVT) scores, the HSLS instead collected math assessments. I wouldn’t consider the latter a true cognitive test.

If we consider the Add Health, the AHPVT scores for Wave I and Wave III showed a pattern which contradicts the race of mother hypothesis. If Asian mother is suspected to be associated with higher children verbal score, it wasn’t evidenced in this data since White mothers had children with a 9 point advantage at Wave I which then was reduced to only 3 point advantage at Wave III. In fact, only the Hispanic-White mating group supported the hypothesis (but this will be explained below).

If we consider finally the HSLS, the math scores still contradict the race of mother hypothesis. Mother’s race wasn’t strongly related to math scores among Hispanic-White and Asian-White matings. But among Black-White mating, Black mothers had children with a large score advantage.

To complement the above findings, I conducted a separate multiple regression for each ethnic group, controlling for SES. After which, a meta-analysis was conducted in order to combine the regression betas across data. The result is displayed in Table 10 (click to enlarge). 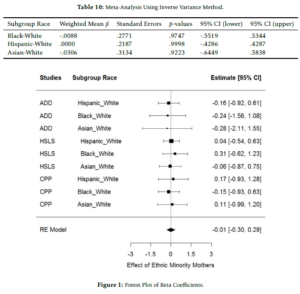 The above figure displays a forest plot of each individual effects within each study. Each one of these estimates is weak and has a value close to zero. The weaker data of the bunch is the Add Health, likely because the sample size is comparatively smaller (due to the public data set having smaller sample than the private one).

Because the meta-analysis was performed using regression betas after partialling out for SES, it could be said that the betas aren’t comparable due to covariates varying qualitatively across datasets, but only parental education was used, and since the variable is very similar across datasets, there isn’t much concern. The advantage of this analysis is that, now, it is easy to further extend it in the future by adding more datasets, since the beta and SE estimates are all available in the spreadsheet (available at OSF). While the meta-analysis looks compelling, I wouldn’t put too much attention to it (yet). One intriguing pattern I found across all these datasets is the fact that children cognitive score seems to closely follow the parents’ characteristics. This isn’t always consistent (small data sets and different tests don’t help much here) but still is worth observing.

One challenge interpreting the data well is that SES may have a different impact across ethnic groups. For instance, if SES explains a huge portion of the Hispanic-White gap but only partially explains the Black-White gap, as is usually the case, it means additional factors have to be considered with respect to the Black-White cognitive gap.