Affirmative action in Brazil: Let all apply and 23andME sort them out

These policies didn’t eliminate race, but they did affect how it came to be classified. The marker of race drifted away from a binary consideration of a person’s ancestry and became increasingly based on one’s appearance.
…
What ultimately binds these definitions together is an awareness that the less “black” a person looks, the better — better for securing jobs, better for social mobility. The widespread acceptance of multiracial identities in Brazil coexists with steep racial inequality — a contradiction that the sociologist Edward E. Telles has called “the enigma of Brazilian race relations.”
…
Eleven experts comprised the panel, among them UFPel administrators, anthropologists, and leaders in the wider black community of Pelotas. They received strict guidelines from the Public Prosecutors Office: “Phenotypical characteristics are what should be taken into account,” read the instructions. “Arguments concerning the race of one’s ancestors are therefore irrelevant.”

“In Aug. 2016, after it had become clear that the law left room for fraud, the government ordered all departments to install verification committees. But it failed to provide the agencies with any guidance.

The Department of Education in Para, Brazil’s blackest state, attempted to fulfill the decree with a checklist, which leaked to the press. Among the criteria to be scored: Is the job candidate’s nose short, wide and flat? How thick are their lips? Are their gums sufficiently purple? What about their lower jaw? Does it protrude forward? Candidates were to be awarded points per item, like “hair type” and “skull shape” …

But black activists say such measures are unavoidable.

When you allow your national policies to be guided by sociological theories, like those of Telles, you are bound to run into this type of mess.

Below are regression results, based on the Pelotas Birth Cohort (n = ~ 2850), for genetic racial ancestry, interviewer and interviewee-reported color (corr), and three SES indicators. In this 1982 birth cohort, independent of European ancestry, it can be seen that there is no consistent negative association between interviewer rated “black” appearance and outcomes. That is, in Brazil, the average race of one’s ancestors is more relevant than stereotypical race-associated phenotypic characteristics. (Note: the sample sizes for “Yellow” and “Indigenous” were small, so those estimates are fairly unreliable; also, neither an East Asian nor Amerindian ancestry component was included). 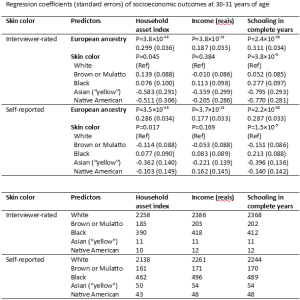 So, if one is interested in addressing historic race-related inequalities, it would be more efficient and just — since (dis)advantages are mostly being passed along lines of descent — to positively discriminate according to objectively determinable biogeographic ancestry, not subjectively assessed stereotypical racial appearance. And it’s hard to see how requiring 23andMe reports would be more intrusive than having a 12 member panel examine applicants for nose width, lip thickness, craniofacial morphology, etc. to see if they are sufficiently African-looking.

Of course, this isn’t going to happen any time soon, since the conclusion that ancestry with respect to major racial or descent groups is relevant to social outcome needs to be evaded, even at the expense of good science and quality social policy.