The claim that the EEA is an unrealistic assumption which is routinely violated in reality is perhaps the most common criticism of the classic twin design. Violations of the EEA generally bias estimates of the effect of heredity upwards and those of the environment downwards. For this reason, there have been a number of studies where the assumption has been put to test with research questions such as:

This research has indicated that the EEA is generally valid and that even when it’s violated, the effect on parameter estimates is small (Barnes et al., 2014; Felson, 2014).

I think sex differences offer an underappreciated way of further evaluating the EEA. Half of DZ pairs are same-sex (male-male or female-female) and half are opposite-sex (male-female), whereas MZ pairs are, of course, all same-sex. Differences in twin correlations across these sex categories are informative about the EEA because if the shared environment differs by zygosity, you would expect it to differ by sex, too.

Classic Twin Design and the EEA

To make it possible to solve for A, C and E, you have to assume that C contributes equally to twin similarity in MZ and DZ twins, that is, zygosity is uncorrelated with environmental similarity. (To avoid having to make this assumption, you would have to have additional data — on adoptees, for example — or, when you have multivariate phenotypic data, you could make some kind of compensatory but more “innocent” assumption as in Derks et al., 2006.) If the assumption is wrong and MZ twins have more similar environments, A will be overestimated and C underestimated.

Critics of the twin method and behavioral genetics in general have jumped on the EEA, arguing that it invalidates the results of twin research. I quote from Burt & Simons (2014), who are typical representatives of this school of thought:

As it happens, and likely not surprising to those who have experience with MZ and DZ twins, this central assumption [=EEA] is flatly contradicted by both empirical evidence and common sense. Research clearly demonstrates that MZ co-twins experience more similar social environments than DZ co-twins. For instance, MZ twins are more likely to be treated similarly by their parents (Evans and Martin, 2000), to have the same friends (Cronk et al., 2002; Horowitz et al., 2003), to share the same classroom (Cronk et al., 2002; Morris-Yates et al., 1990), to spend time together (and therefore experience the same social environments more frequently; Horowitz et al., 2003; Rende et al., 2004), and to go out together than DZ twins (Kendler and Gardner, 1998). Not surprisingly, MZ co-twins also report greater closeness and identification with one another (Jackson, 1960; LaBuda, Svikis, and Pickens, 1997; Segal, 2000) as well as mutual influence (Ainslie, 1997; Sandbank, 1999). For example, studies reveal that MZ twins are more likely than DZ twins to share bedrooms and clothes, and to share experiences like identity confusion (91 percent vs. 10 percent), being inseparable as children (73 percent vs. 19 percent), being brought up as a unit (72 percent vs. 19 percent), and having a high level of closeness (65 percent vs. 19 percent) (Richardson, 2011). Perhaps at the most basic level, MZ twins are treated more similarly and experience situations more similarly given their more similar appearance (attractiveness, height, physicality, and the like; Horowitz et al., 2003; Joseph, 2004).

Now, I believe that the available research clearly shows that while MZ twins tend to experience more similar environments than DZ twins, there is little evidence that they experience more similar trait-relevant environments. That is, while MZ twins may be treated more similarly, this is not the cause of their greater similarity vis-à-vis DZ twins. This conclusion is also in line with the general behavioral genetic finding that the shared environment contributes little to familial phenotypic similarity. If the shared environment has modest causal efficacy in general, it’s implausible that the limited environmental differences associated with zygosity would have large effects.

If it is true that these kinds of influences have large effects on psychological and other phenotypes, then you would expect same-sex DZ twins to be much more similar than opposite-sex twins. This can be readily investigated with data from Polderman and colleagues’ (2015) gargantuan meta-analysis of all twin studies conducted to date. Across thousands of traits and millions of twin pairs, the correlations look as follows, on average (m=male, f=female, all=m+f, ss=same-sex, os=opposite-sex): 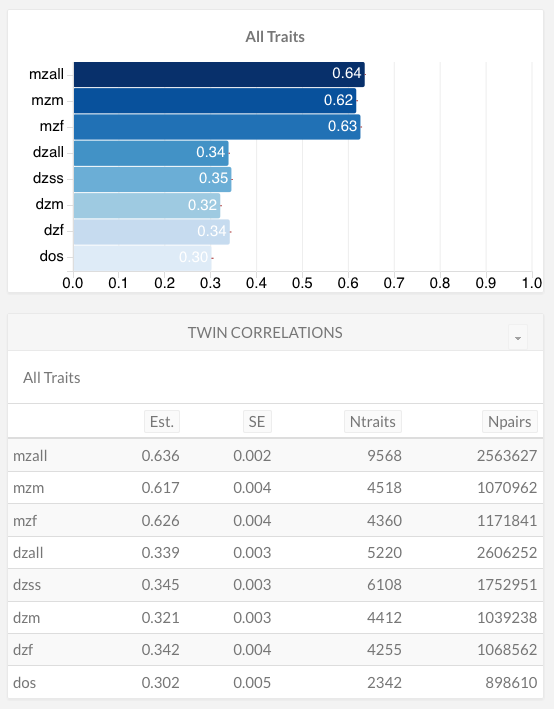 Across all traits — which range from psychological to sociological and from medical to morphological — the average same-sex DZ correlation is 0.35, while the average opposite-sex correlation is 0.30. At first blush, this suggests a small excess environmental similarity of 0.05 for same-sex DZs compared to opposite-sex ones. However, the average MZ correlation is about 0.63, indicating that any effect of sex is dwarfed by the effect of zygosity. Moreover, the slightly greater similarity of same-sex DZs is unlikely to be wholly due to environmental differences. Many traits examined in twin studies involve innate sex differences. For example, same-sex DZs have more similar heights than opposite-sex DZs not because of gender socialization but because height genes are differentially expressed in males and females.

As the above data merges together all kinds of traits, age groups, etc., it’s useful to bore deeper into the Polderman et al. dataset. For example, here are the twin correlations for all traits by age groups:

The data show that the same-sex–opposite-sex difference is small compared to the MZ-DZ difference for all age groups.

Here’s another set of twin correlations, this time for various traits in the cognitive domain: 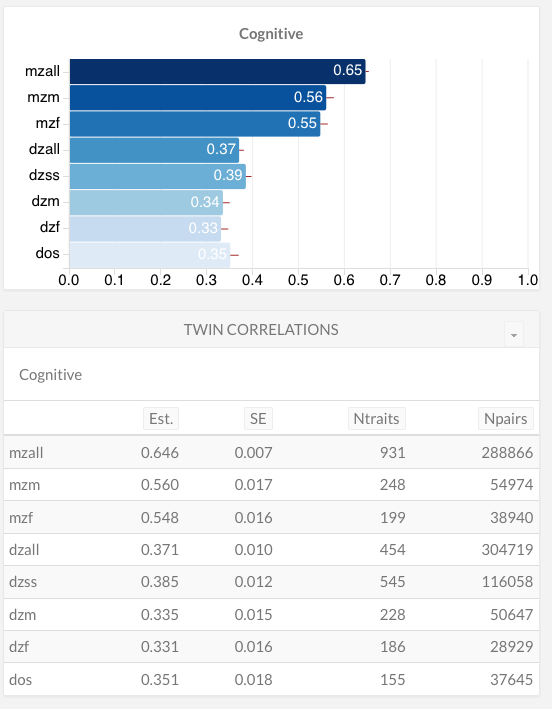 There is no meaningful difference between same-sex and opposite-sex DZs, but the MZ-DZ difference is again large.

Moving away from the aggregated data of Polderman et al., let’s take a look at the analysis of GCSE results in Shakeshaft et al. (2013), GCSEs being exams taken at age 16 at the end of compulsory education in the UK:

Another large twin data set has been analyzed by de Zeeuw et al. (2016). They looked into the school achievement of 6-12-year-old Dutch children, with the following results:

As a final example, here are non-twin sibling correlations for IQ from Paul’s (1980) meta-analysis: 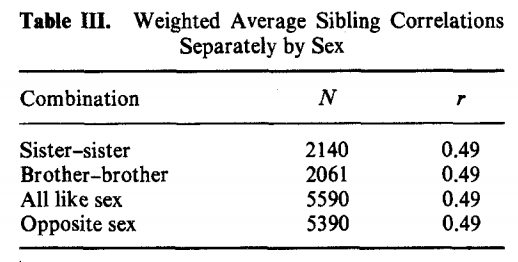 The correlation is the same for same-sex and opposite-sex siblings, with environmental differences associated with sex exerting no discernible influence.

As a rule, sex-related differences in DZ twin correlations are small to non-existent compared to the typically large differences between DZ and MZ twin correlations. Opposite-sex twins differ from each other on most of those environmental influences (and not only those) that EEA critics have postulated as causes of MZ similarity. The fact that opposite-sex twins nevertheless are not notably less similar than same-sex DZ twins serves as strong evidence in favor of the EEA’s validity. The same-sex–opposite-sex difference is a statistic that could be utilized in large twin samples as a way to test the EEA, especially for phenotypes with no large sex differences in means or variances.

Felson, J. (2014). What can we learn from twin studies? A comprehensive evaluation of the equal environments assumption. Social Science Research, 43, 184–99.