Is there no population genetic 'support' for a racial hereditarian hypothesis?

Over the last decade, scores of large scale admixture-mapping studies have been conducted largely in an attempt to elucidate the origin of ethnic disparities in disease rates and medical outcomes.  In the simplest type of such studies, researchers determine if there is a robust association between genotypically defined continental racial ancestry (typically: African, European, and Amerindian) and relevant outcomes in admixed populations.  To control for potential confounding effects, measures of educational attainment and other indexes of SES are often included in the analyses.  These variables are often treated as environmental indicators, which is odd, since within populations they are found to be under non-trivial genetic influence.  For example, based on a recent international meta-analysis of biometric studies involving 51,545 kinship pairs, Branigan, et al. (2013) found that educational attainment had a kinship-based heritability of 0.40, meaning that genes explained 40% of inter-individual educational differences; based on a sample involving 7,959 individuals, Rietveld et al. (2013, table S12)  found a GCTA-based heritability, one which takes into account only the effects of population-wide common genetic variants, of 0.22.  These results were replicated by Marioni, et al. (2014, table 3), who found a kinship-based heritability of 0.40 and a GCTA-based one of 0.21.  When genes explain some of the variance in a trait within groups, they plausibly explain an indefinite portion of the variance between groups.  Curious it is, then, that these external outcomes are often assumed to represent environmental influences between groups.

Recently, Piffer (2013, 2014, 2014) and Piffer and Kirkegaard (2014) found that continental races, that is, continental level human groupings where members are arranged by overall genetic affinity,  differ in their allelic frequencies for well-replicated alleles that are causally associated with both educational attainment and psychometric intelligence.   The results are tentative, but they support the position that the well documented regional variation in cognitive ability, and, by way of it, regional variation in levels of education has a partial genetic basis.  Based on the results and, more generally, the typical racial hereditarian position (with respect to cognitive ability), which these results generally support, one would predict that Sub-Saharan African, Amerindian, and Pacific Islander ancestry would be, with high consistency, negatively correlated in admixed samples with educational attainment and other cognitive correlates such as income and occupational prestige.  Conversely, one would predict that European and East Asian ancestry would be positively so correlated.  As educational attainment and SES are substantially environmentally influenced, as the magnitude of associations depend on the degree of range restriction in relevant ancestry components, as statistical significance depends on sample size, and as there are a number of confounding factors, one would not expect a perfect degree of consistency, just a relatively high one.

Other hypotheses could account for a fairly consistent association between continental ancestry and the mentioned outcomes, if such exists.  For example, the associations could be attributed to fairly consistent colorism, to assortative exogamany, or to intergenerationally transmitted environmental advantage.  Regarding the first, it could be said that phenotypic based discrimination mediates the association between genotypic ancestry and outcomes.  Regarding the second, it could be argued that historic racial groups, at least in the Americans, stared out with the same genotypic potential, but due to differences in initial social standing, assortatively outbred such to produce ancestrally correlated genetic stratification in educational and SES related latent traits (see e.g., Valenzuela, 2011).  Finally, it could be maintained that historic racial groups stared out with different shared environmental levels related to the relevant traits and that they have been intergenerationally passing differences on, along family lines, for hundreds of years. Nonetheless, it’s not inevitable that admixed populations will show fairly consistent associations between ancestry and outcomes. Indeed, admixture studies have apparently uncovered some ethnic, in the sociological sense, differences which are unassociated with continental racial ancestry.  For example, despite significant U.S. Black-White differences in the rate of kidney disease progression, Peralta (2006) found no association between disease progression and European ancestry in the African American population.   They reasoned:  “This suggests that the tremendous burden of kidney disease in African Americans may be more attributable to environmental factors than to their common genetic African ancestry.”  Given that such an association is not necessary, a finding of one would represent population genetic support for a racial hereditarian model, since this model would predict such and since some competing models do predict otherwise.

To explore whether or not there is such an association, we conducted a review of the admixture mapping studies published between January of 2004 and September of 2014.  We relied on “google scholar” as a search engine and used search phrases such as “admixture African/Amerindian  socioeconomic/education”.  In total these searches turned up approximately 20,000 hits in descending order of relevance to the search terms.  The first 1,500 abstracts were skimmed.  Approximately 250 papers were identified as potential sources and read.  Of these, 31 reported, for individuals residing in the Americas, associations between continental ancestry (e.g., European, Amerindian, Sub-Saharan African, East Asian, and Pacific Islander) and some index of educational attainment or socioeconomic status.  The following countries and groups were represented: Brazil, Chile, Colombia, Costa Rica, Mexico, Peru, Puerto Rico, Trinidad and Tobago (Black population), and U.S. (African, Hispanic, Native, Asian, Pacific Islander, and Caucasian Americans). The results are summarized in the table below: 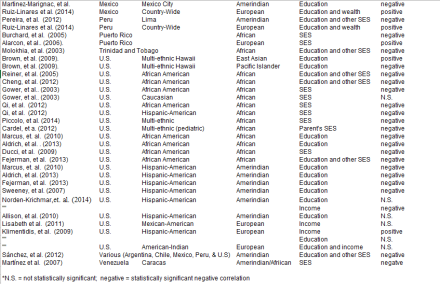 (Sources and excerpts from the papers can be found in the excel file. The PDF can be downloaded here.)

Unfortunately, the data did not allow us to compute a meta-analytic estimate of the associations (correcting for range restriction, etc.).  We attach the studies, though, so that readers could peruse the reported results if so desired.

None of the associations went in a direction opposite to that predicted.  Six, all from the U.S. were non-significant in at least one index. Of these samples, the non-significance could readily be attributed to statistical power in two:  Gower, et al. (2003) found that African Ancestry was negatively but not significantly correlated with education among U.S. Caucasian children — this was most likely due to range restriction in admixture, as suggested by the percent admixture reported for this sample; Allison et al. (2010) found that Amerindian ancestry was negatively but non-significantly correlated with educational attainment in a Hispanic American sample — the P-value, though, was 0.11 for education and 0.07 for income. Of the four other samples, all involving Hispanics or Amerindians, two showed significance for income but not education and two show no significance for the single index used, income in one and education in the others.  In total, out of the 9 U.S. Hispanic or Native American samples, in four the association was significant in the one reported measure (in all cases, education), in two, it was significant in one out of two measures and in two it was non-significant in the mentioned measures.  Generally, in the U.S., Amerindian ancestry in admixed populations was inconsistently negatively associated with educational and SES related outcomes.   However, were one to meta-analyze the results, the association would be highly significant in the predicted direction.   It’s not clear what factors are behind the inconsistency;  likely, migrant generational status is a confound.

Generally, the results support a racial hereditarian hypothesis along with others that predict a fairly internationally consistent association between continental ancestry and cognitively correlated indices of socioeconomic status such as education, income, and job prestige.

Pereira, et al.  (2012). Socioeconomic and nutritional factors account for the association of gastric cancer with Amerindian ancestry in a Latin American admixed population. PloS one, 7(8), e41200.

Cheng, et al. (2012). African ancestry and its correlation to type 2 diabetes in African Americans: a genetic admixture analysis in three US population cohorts. PloS one, 7(3), e32840.

Cardel, et a. (2012). Parental feeding practices and socioeconomic status are associated with child adiposity in a multi-ethnic sample of children. Appetite,58(1), 347-353.

Ducci, et al.  (2009). Association of substance use disorders with childhood trauma but not African genetic heritage in an African American cohort.  American journal of psychiatry, 166(9), 1031-1040.