Fuzzy Wuzzy was a bear….

GC maintains that the Hispanic-White IQ difference fails to converge by the fourth generation. If so, this would be informative as to the etiology of the differential. I articulated why in a previous post. IQ differences between families, within populations are poorly environmentally transmitted across generations. This is because the environmental correlation between parents and offspring is low. The situation is depicted below:

To investigate Greg’s claim, Meng Hu and I look at the association between the magnitude of the race and ethnicity AFQT gaps, in the NLSY 97, by the number of US born grandparents that individuals had. Meng Hu will post on the specifics of this analysis later. Till then, I will just say that Greg’s basic conjecture is not incorrect. The 4th+ generation IQ gap in the NLSY 97 is little different from the 3rd+ generation gap in the same sample. (For background, readers are referred to Chuck the Occidentalist’s discussion of the 3rd+ generation NLSY 79, NLSY 97, and CNLSY IQ differences and his other numerous discussions linked to in his “The performance of our new Americans in the National Assessments of Adult Literacy (NAAL)” post.)

Ok. But we can decompose the populations in other ways than by generations. Hispanics are, largely, defined in terms of language. And the language difference between Hispanics and Whites is likely a source of psychometric bias. To disentangle the possible effects of language bias, we might compare English only speaking Hispanics with English only Speaking non-Hispanic Whites. The question, of course, is begged: Are non-Spanish speaking Hispanics really Hispanic? But we shall ignore this query. Below are the results from the 2003 nationally representative National Assessments of Adult Literacy. (A) gives the results by language spoken by parents at home; (B) gives the results by languages spoken by the individual if combinations of languages are spoken; and (C) gives the results by language spoken most frequently by the individual. As it can be seen in figure A, the difference between Hispanics and non-Hispanic Whites who were raise in English only speaking households is a trifling 1/3rd of a standardized unit. The difference between Hispanics and Whites who reported only speaking English or mostly speaking English isn’t particularly small compared to the overall difference, but the smallness of the difference in analysis A is still of significance. 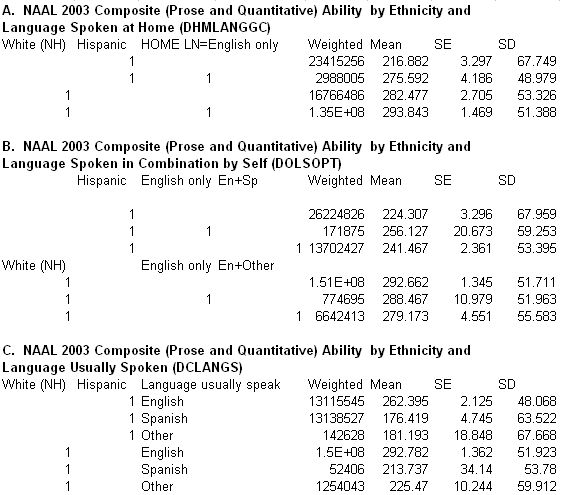 The reduction of the difference when taking into account language spoken by parents is interesting in light of the findings of a minimal reduction when taking into account generation. To make sure that I wasn’t dealing with an anomalous sample, in this regards, I looked at the relationship between generation and language spoken at home. We see, in the figure below, that 3rd+ generation Hispanics (both parents were US born) who grew up in English only speaking families perform almost 1/3rd of a standardized unit better than 3rd+ generation Hispanics who grew in non-English only speaking households. In light of these results, it could be argued that the language difference is perpetuating some of the cross generational IQ score difference. This would be a between population effect and one due to psychometric bias. The situation is not clear because “Hispanics” have a high rate of exogamy and so language spoken by parents also indexes parental ethnicity. That is, those Hispanics who tend to grow up in English only speaking households tend to have non-Hispanic parents or grandparents.

This phenomenon can be seen in the 1993-1994 Add Health sample. Below is the frequency distribution for home language (H1GI10) by spouse’s ethnicity (PB3) when the responding parent is Hispanic (PA4(1)).

Or conversely, by responding parent’s ethnicity (PA4) when the spouse is Hispanic ((PB3(1)).

Above, I qualify “effect” with “statistical” because it’s not clear that language spoken at home, independent of parental ethnicity, is causally active. One could imagine other pathways. It’s not implausible, for example, that lower aptitude Hispanics are less socially mobile and so less likely to linguistically and culturally assimilate. Were this the case, propensity of parents to speak Spanish at home, when in the US, would negatively correlate with offspring aptitude, independent of any direct effect of language on aptitude. Whatever the case, on the face of it, the mean differences above are more consistent with a language + genetic model of the H/W ability difference (and of assimilation) than with either an exclusively language or genetic model.

IQs of US Immigrants in the NLSY97 (Whites, Blacks, Hispanics)